Adventures in Margo the Carthago 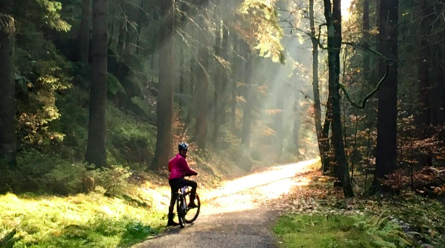 Robbed at the border

The Mouvement des gilets jaunes was in the beginning partly motivated by rising French fuel prices, although today the purpose of the protest is more generally anti Macron. For the last four or five weeks, whilst in Spain we’ve been enjoying low cost diesel at average price of €1.18 per litre. Therefore leaving Spain with a near empty tank wasn’t our smartest ever move. At the first supermarket (usually the cheapest) in France the bandit fuel pump attendant filled our tank with 60 litres of diesel at €1.43!!! That’s €15 stolen from our wine budget…

As we travelled further into the interior of the French Basque region the houses became quite uniform in colour and style. Many of the villages were immaculately presented, with chalet style buildings painted brilliant white, with red doors, shutters and facias all surrounded by neat regulation length manicured grass. It all looked a bit – too perfect. Clearly the regional planning department were the kind of people not to be messed with!

St-Jean-de-Pied-Port was declared a World Heritage Site by Unesco in 1998. In the Middle Ages travellers had to pay, a toll at this point on the route in order to continue on their way.
They suffered punishments if resisted, as was described by the monk Aimery Picaud in the Codex Calixtino: “The toll collectors are so evil they deserve the utmost condemnation, because, armed with two or three clubs, they stop the pilgrims in their tracks and forcibly demand unfair taxes. And if any hiker refuses to pay the money they ask, they are hit with sticks and amid threats, searched down to their underwear and have their documents removed…”

Thankfully it was only their documents that were removed…!

Perhaps this might be where phrase “Getting Your Pants Pulled Down” originated?

Our target destination for the next few day was in and around the city of Pau, but as weren’t in a hurry we picked out from our France Passion guide a site to stay for the night. These locations in the UK are normally on farms for example, where you might buy some local produce, cheese, eggs vegetables etc. But as were in France – It’s a vineyard!

We pitched up as the family were gathered together to enjoy the last of the late afternoon sunshine. The vineyard wasn’t huge and supplies its grapes to the local co-operative winery for pressing. Our host (age 82) was lovely. Since her husband died she now lives alone, with only Willy a 17 year old scamp of a sheep dog for company. Her son looks after the vines and was there when we arrived with his brother and his children. We had a warm welcome (we had to politely refuse the offer of doughnuts) but the only english spoken was from Madame’s tech savvy 8 and 10 year old grandchildren via Google translate.

You are not obliged to buy the produce at a France Passion stopover but, well it would have been rude not to have at least sampled the wine(s). In the end we paid €11 euro for a free night parked outside the house (guarded by Willy) plus 3 bottles of Huste Clos Jurançon sec 2017. Very nice.

Saying our goodbyes (you should have seen Willy’s broken hearted snuggling up to Lesley as we were leaving), we heeded Madame’s advice and headed for the aire at Pau’s TGV railway station.

Until the mid-19th century, Pau had been a relatively insignificant French provincial town. Then the English came and the boom began. Villas with huge gardens sprang up everywhere. The Boulevard des Pyrénées became what it is today: a kilometre-long stroll in the shade of palm trees with magnificent views of snowcapped peaks.

We only saw the grid markings on the road, but every year in May the city of Pau plays hosts to a number of motor-racing events on its street circuit. The current circuit was establish in 1935 and has since held Formula 3 and the World Touring Car Championship events as well as the the GP de Pau Historique.

Motorsport is not the only form of racing for Pau to witness, as it is also the most visited location in Tour de France history. In the past nine tours, the race visited the town in the Pyrenees’ foothills nine times.

Travelling around France we have been impressed by the number of electric vehicle charging points we’ve seen. It’s great to see electric vehicles growing in popularity. With the total number of electric cars sold in Europe now more than 1 million, the UK sold 30,040 plug-in cars and vans in the first half of the 2018. However with the 3,500kg weight Charlie carries, I think it’ll be a while before he need worry about being replaced.

So after tales of Robbery Assault and Battery it’s good to end on a positive note, but perhaps only Genesis fans will understand when I say Los Endos.

2 Comments on “Robbed at the border”